I’ve fallen in love with clojure and as part of my learning, I’ve set myself the goal of solving all the problems on the excellent 4clojure site. I was a painter and decorater by profession up until the age of 30 so I have no background in computer science or in depth mathematics but part of my fascination with 4clojure is that some of the harder problems introduce concepts that are completely foreign to me like graph theory. I get a kick out of digging into the theory behind the problem before trying to code my solution.

Given a graph, determine whether the graph is connected. A connected graph is such that a path exists between any two given nodes.

-Your function must return true if the graph is connected and false otherwise.

-You will be given a set of tuples representing the edges of a graph. Each member of a tuple being a vertex/node in the graph.

-Each edge is undirected (can be traversed either direction).

You are then presented with a list of input and outputs that require a common function to balance both sides of the argument, e.g.

The job of the user is to provide a function that will replace the __ characters to complete the expression.

The elements of the above set represents the edges of a graph. A graph edge can be thought of as a line or path that connects two graph nodes or vertices as they are known in graph speak. Each element of the set contains a vector with two vertices that have a path between them. We could visualise the above graph in the image below:

![connected graph](connected1.png)
The problem stated that the function must return true if a path exists between any two nodes. You can see from the above diagram that each node is acccessible from each other.

Another of the expressions in the problem provides a set of edges that are not connected:

You can visualise the unconnected graph below: 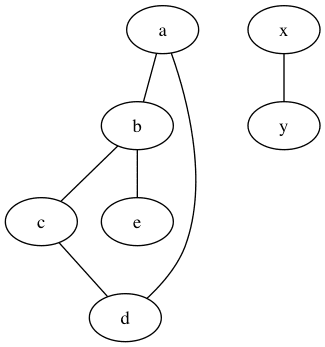 Another way to view the above graph is to say that it is made up of two components. We are dealing with undirected graphs which means that the edges can be travelled in either direction or more specifically, the edges do not point in any direction. A component of an undirected graph is a subgraph in which any two vertices are connected. In the above diagram, there are two components, the one on the right with the x and y vertices and the other component which is made up of the remaining vertices. The connected example can be thought of as one component.

Show Me the Code

If we are to use this concept of components as is outlined above, then we could say that if we can get the number of components in a graph and if that number is equal to one then the graph is connected. If we have more than one component then quite obviously the graph is disconnected.

After consulting the book of knowledge, a.k.a. wikipedia, I found this entry that gave me an outline of an algorithm that I could use to tell whether I had one connected component or not:

A search that begins at some particular vertex ```v``` will find the entire connected component containing ```v``` (and no more) before returning. To find all the connected components of a graph loop through its vertices , starting a new breadth first search whenever the loop reaches a vertex that has not already been included in a previously found connected component.

Armed with the above algorithm, I was able to construct the code to solve the problem:

I’m still new to clojure and there is definitely better ways of doing this. One problem is that this function is in no way lazy.

I found this a hugely enjoyable problem to solve.