In my last post here, I put forth the argument that the new data flow story of ember next does not go far enough. I now want to suggest a way that we could bring some much needed sanity to our ember applications. I have been on the same ember project for 2+ years and here are some of the problems that I have found with ember during those 2+ years:

Where we are heading

Data Down and actions up is the new meme being pumped with ember 2.0 but as I mentioned in my last post, this does not go far enough. Now I fully agree with the data down part but what I disagree with is actions up or more specifically actions being propagated to a parent component.

Where we could and probably should go

I have created this TodoMVC style application to illustrate the example and you can find the source code for this application here. I’ve added undo and redo functionality to illustrate how much easier this is with immutable datastructures which we will get to later.

The basic premise behind flux or reflux is:

The basic premise is that components call actions that initiate new data changes in the data stores (don’t confuse these stores with the ember-data store). Mutation of data can only happen through calling the actions. The data stores listen on the actions and mutate the data within the store. This keeps the data structure flat and lets the concerns of data manipulation be the purpose of the store. This totally removes the chance of side effects that may happen if components are charged with handling data on their own.

The stores then let the components know of any new data changes as a result of the actions. When data flows in a single direction like this, it is much easier to follow or reason about what is happening in your application which is in contrast to the state of ember today. Components can only manipulate or mutate data by executing an action.

If we take the example of the todo application, I have a file where I add any new actions that will be needed to manipulate the todos:

I will use creating a todo to illustrate the data flow. The above code lists an array of actions that signify all the operations that were required to manipulate the todos in the application and on line 2 is an addItem action that a component would call to create a todo. I hacked together a basic pubsub mechanism to mimic the role of the dispatcher in the real reflux library. This pubsub mechanism or poor man’s dispatcher is used to raise events from the components to the stores that are subscribed to these actions. I used an initializer to read the array of actions above. A TodoActions object is created and injected into all components. This will decouple the component and the store.

Manipulating todos is done through this UI: 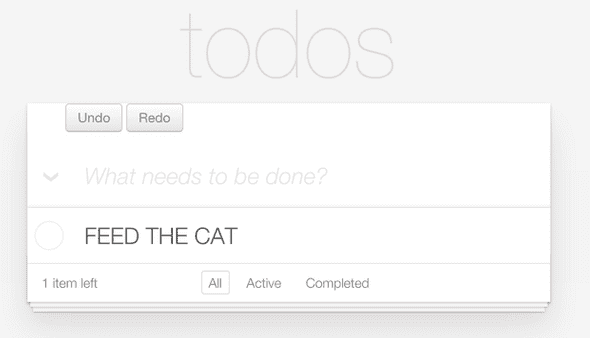 The todo-list component in turn creates todo-item components like so:

The TodoHeader component contains the textbox that listens for keyDown events and if enter is pressed it will call the addItem action on line 6 of the code listing below:

The pubsub mechanism will then let any subscribed stores know that an addItem event has occurred.

I have created a TodoStore object and included this simple mixin in the TodoStore to subscripe to the array of actions:

The mixin is then included in the TodoStore definition where it pulls in the list of actions via the listenables property.

The convention of reflux is to name your handler onAction and the ConnectListenersmixin will check for the correct handlers on the class that includes it and subscribe the store to the array of actions that was listed earlier.

When TodoActions.addItem is called from the store, the pubsub mechanism will try and route the event to an onAddItem handler in the store.

Immutable data structures are called persistent datastructures because they persist a previous version of themselves when modified. This is ideal for redo and todo functionality. I simply add the previous version to an undoList vector whenever the todos vector changes on line 11 of the code above. I have undoList and redoList vectors and I simply cons the application state onto the relevant vector that I can pop off when they are called…via actions of course!

The call to mori.conj will create a new persistent datastructure on line 9 of the above code and I then call updateList that looks like this and will then send the data down to any components that are listening for store events. updateList looks like this:

The updateList function calls getPayLoad that packages up the updated list for the components to rerender based on the changes:

getPayLoad returns the current list of todos and also some additional information that is used to render the various components. Using this technique, I can totally avoid the computed properties that I would normally create for this type of operation. The components know nothing about the internal structure of the todos or that they are immutable data structures in the store as they are converted to normal POJOs on line 9 of the above code block.

I then include the following mixin in all the relevant components that want to listen to store events and re-render the application state changes:

The store will not push these updates until all application state changing code has executed. I won’t get side effects or other surprises until the store has finished its work and pushed the changed application state back down.

The upshot of this architecture is that it is very easy to reason about, all mutations are happening in a controlled and logical fashion. I have not used a computed property nor have I used an ember-data class but of course this example is very trivial.

All the actions take a similar flow to this, below is the onEditItem TodoStore handler that has to clone the todo first to before making state changes:

Undo/redo is simple in this case as we are not having to roll back the changes on the server but diff checking is considerably easier with immutable data structures and we could use that to see what has changed. Below is how the undo action looks:

I’m too long in the tooth to get too carried away with this simple example, I have no Ajax calls, web sockets or even nested data structure so the jury is still out on how this would pan out in a real application. Another question would be, why not just use react? I would use react if I was not on my current project but I am not about to advocate refactoring 2+ years of code to a different MVC framework.

What I like about what I have discovered with this simple experiment is:

If you have any feedback on any of this then leave a comment below.